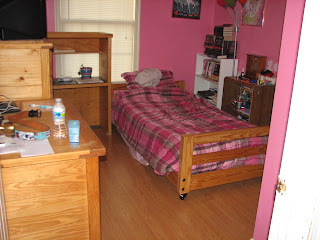 Today, I got the chance to go to Home Depot, sans hubby, to pick up a paint palette for my daughter to start picking a color for her room.  Current room, recently redone with flooring, and the bunk is gone, but still way too pink since she is no longer 5 years old.  She tagged along, and we browsed different areas, because, I never get time to do this when I'm with him.  He goes in there on a mission and it's get what he is after, and gone.  Me, I don't know what I want, I want to see & dream & what if (I had an unlimited supply of cash to do what I wanted)!  We just started the project in the past month, of redoing our main floor in hardwood laminate, to get rid of some nasty carpeting that was harboring allergens that were killing my eldest child.  Last school year.. 32 sick days.  Yes, you saw that right.  Most were from allergy flareups that she could barely function.  We are working to solve this problem, tho it's taking longer that I thought it would.  I mean, you read that you can order the installation when you get the flooring.. so you figure ok, they could have it done in a day, why can't you?  Yea, not so much.  A month later, (working pretty much weekends only, due to commute times during the week and just wanting to be comatose after dinner) we have 3 rooms and a hallway done.  Our bedroom, and the living room is to be last.  In the mean time, it's a bit of chaos up there in the living room, where the flooring is being stored, and much of the sawing took place. 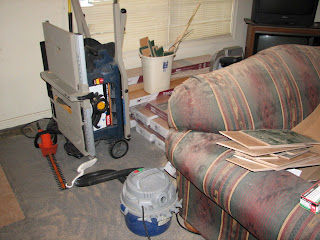 So, yes, the distraction was nice today, dreaming of the beauty that would be ours eventually, when this is all done.  When we were picking our flooring out, we had a tight budget, and we had a good idea of what we wanted.  The one thing I wished I could have had, was a *shiny* wood floor.  I was told that the only way we'd get that, is if we got REAL wood flooring, which is about 10x our budget.  So, I was pretty happy with our selection anyway, it matches our cupboards & kitchen table pretty well.  Until I was browsing the samples in the flooring area, and lo & behold, there was a laminate hardwood floor that was *shiny*!  Well, I took the sample, just to show him and say.. nyaaaaa nyaaaaaa.. it's shiny, and laminate!  I know that it was a much nicer floor than we could have afforded anyway, but in my little head, all I could think of was.. *ooh, shiny*  The trip wasn't a total waste tho.. I did get some new florescent bulbs we needed, the paint palette for the little one to ponder for a week, a light fixutre idea for my kitchen (that will require more work of hubby!), ideas for cabinetry, interior door, chair rail, and knowledge that they do not carry hampers in the store. Bah.
Leaving the store, I saw the privacy fencing lined up along the exterior of the store.  Hmmm.. which one do I like?
Oh, and the oldest child, she had her colors picked & walls painted already.  Her sister is NOT allowed to copy her. She picked Teal & Ice Blue trim.  Pretty, isn't it? 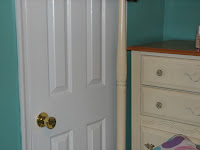 This is a drill, right?

Trying to get back into the swing of things, it's been so long since I tried to do regular updating on a site, and honestly, my life is so monotonously boring, it's hard to come up with anything of interest.  But, yesterday, there was something I think worthy of a giggle.  Well, if by giggle, I mean, damn, how stupid can we all be, then yes, it was laughable.

The end of last week, I received a memo that I was asked to forward to all employees.  (I'm the receptionist, so I get this task from time to time.)  One day this week, the building would be conducting fire alarm testing, and we were to simply ignore the alarms, and there was an apology for any inconvenience, and that they would attempt to complete testing quickly.  The date was also given somewhere in the memo, as to when they would actually do the testing.

Yesterday afternoon, roughly 12:15pm, the alarm started going off, while I was in the supply room putting supplies away.  Another person was in there using the laminator.  We looked at each other, and said.. "this was the drill, right?  we don't have to leave, we can ignore.. yea, ok." It continued to signal for several minutes, and my ears were ringing, as 1 of the bells was right over our heads.  I finished quickly then and started for my desk.  Not that it was really quieter there.  As I approached my desk, one of our security guys comes up to me and simply says "Meg, get out" and I replied, "I thought this was a drill.." and he came back with.. "That was *yesterday*.  Crap.  Snagged my purse, and off I went.  Down 4 flights of stairs.. for the 2nd time in .. 2 weeks?  When did we have that earthquake?  Yea, I really don't do stairs that much.

Apparently, a LOT of people were thinking the same as me.. this was the drill and not the real deal.  Next time, if they announce a drill & to ignore the alarms.. guess who may be the first one out of the building if/when alarms are heard?

Oh, and our building is fine.  Some smoke was seen on the 5th floor (top floor) and after all the firetrucks showed up, it wasn't long before they all left.  In all, we were outside about 30 minutes, plus the 15 minutes that we all wandered around thinking, "damn, the alarms work, drill's over, shut em off already!"

Personally, I think someone burned thier popcorn!
Posted by Meg at 9/02/2011 1 comment:

So, my name is Meg, obviously.  I have recently started reading blogs, again.  And in my reading, I realized, a lot of these are just ordinary people, putting their lives out there, for anyone to share, and perhaps offer a smile, a laugh, or even a bit of wisdom.  I am pretty much as boring as they come, but from time to time, I get inspired, and thought this may be a good way to just get my thoughts out there, even if I'm only talking to myself.  Sometimes, you get the best conversations that way.

I wanted to give a shout out to the 2 blogs I've been reading most recently, The Bloggess and Telling Dad.  Both are a great read, fun & entertaining.  I can only hope to not put anyone to sleep that decides to stop in.  Unless of course, you're suffering from insomnia, and really need to sleep.  Then, yes, by all means, sleep!  Just, don't get the drool in your keyboard, or stamp QWERTY on your forehead.  It's just really uncomfy.
Posted by Meg at 8/10/2011 No comments: